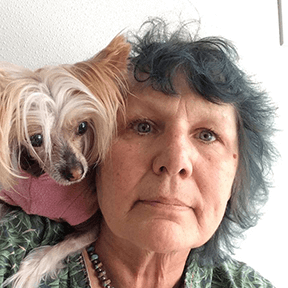 Q: How many Chinese Cresteds have you rescued since 2001?

A: We have saved between 125 and 165 Crested. The most we’ve had at a time has been about a dozen. That was really crazy. That kind of thing happens when a hoarder or breeder gets busted. We have people who help foster now, so we try not to foster more than two or three at a time.

Q: There are so many rescue groups. There must be one for every breed.

A: I think there are! There’s even a rescue group for Xoloitzcuintli, a hairless breed that just got recognized by the American Kennel Club. Rescue dogs know they’ve been saved. They’re not like pedigreed dogs, acting all spoiled and entitled. We are such a throwaway society. Too many times, if a dog doesn’t work out, people just throw it away.

Q: Is that a dragon-dog sculpture in your living room?

A: Yes! It’s a Chinese dragon dog inspired by our visit to Thailand. They have such great mythological creatures! Elephant dragons! Horse dragons! There’s a royal barge with a prow that’s a fanged swan. My inspiration jumps around, based on my life experiences. The buildings in Thailand! Oh, my God! We have a Thai temple that we’re making out of a gazebo in the back yard.

Q: Is that a collie Virgin Mary over there?

A: That’s Virgin Mary Lassie. I also have a German shepherd Rin Tin Tin Jesus. Those are from my Dogma series, about how the figures in the Catholic dogma bear a close resemblance to the qualities we find appealing in the modern dog: loyalty, unconditional love, etc. The pairing of the figures with dog characters in popular culture was kind of a natural, for someone so driven and unconventional.

Q: Is her veil a pillow case? Under the wire halo?

A: It might be. I get a lot of stuff from thrift stores. I found a child’s gas mask from World War II at either a thrift store or a flea market. It might have been that marvelous Stage Stop flea market that used to be at Wadsworth around 38th; it closed years ago. Have you ever been to the huge one in Laramie? Right at 287 and I-80? Best place EVER for old glass bottles. Google ‘Bottle tree.’ I’m making one.

Q: Do you have a favorite piece?

A: I did a life-sized tableau of the game of politics, modeled after that famous painting of dogs playing poker. It’s my masterpiece. I captured a scene from 2006. George W. Bush is a labradoodle, a silly, expensive designer dog. Osama bin Laden is an Afghan hound, which he kind of resembled. Kim Jong Il is a Korean jindo dog. Tony Blair is an English bulldog.

Q: What do you use to make the eyes so arresting in your sculptures?

A: Taxidermy eyes! Most of my materials come from Home Depot and taxidermy shops. The eyes are the key to those sculptures. The expression relies on precision. When you’re setting the eyes, even the tiniest shift means the difference between an engrossing expression and looking drunk.

Q: Do you build all your sculptures yourself?

Q: What’s something you really enjoy?

A: Getting custody of a frightened, distrustful little dog, and making it feel safe.

Q: What’s your idea of misery?

A: To be crammed into a filthy cattle car with many others, having committed no crime, being taken to a concentration camp in World War II.

Q: What’s your idea of happiness?

A: A lonely two-lane road, several free days, a sleeping bag, a dog, my minivan and no clear agenda.

Q: What’s your favorite trait in others?

A: A sense of humor.

Q: Do you have a favorite bird?

A: The iridescent cobalt blue satin bowerbird. It creates fantastic artistic love nests, decorated with a variety of random objects, all blue.

Q: Who are some of your favorite musicians?

A: It varies, but lately, that period of musical history where rock and disco were merging into punk and new wave, I guess. Talking Heads. Oingo Boingo. Supertramp. Don’t people our age like the music we grew up with?

Q: Do you think you’ll ever go back to guerrilla art?

A: I’ve been thinking about it. This year, 2013, is a significant year for me. I turn 60. It’s the Chinese Year of the Snake, which is my birth year. I just found a plaster cobra at a thrift store. So who knows? Maybe snakes. They’re very quick, just swipe, swipe, swipe with spray paint, and you’re outta there.

A: If I did, my motto might be: “I don’t necessarily want to recommend being unconventional, driven, or compulsively creative, but those things have always worked for me.”