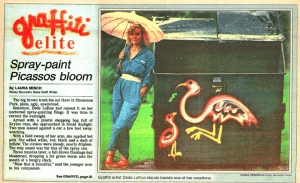 Sometime in the ‘80s, spray-painted pink flamingos began appearing on the sides of dumpsters and rollaways around Denver, long before the city even imagined it had a graffiti problem. They were left there by Dede LaRue, an artist/troublemaker with a delightful sense of humor. She’s best known now for her sly and lively menagerie of papier-mâché and mixed-media animal sculptures, including the iconic tiger that’s leapt through a glowing hoop at the Mercury Cafe for many years. And her love of animals spills over into other parts of her lifestyle: She’s also a dog groomer and runs the local Chinese Crested rescue. How does an artist who operates on pure imagination interact with the rest of the world? With unfettered brio — as evidenced by her answers to the 100CC questionnaire.

Westword: If you could collaborate with anyone in history, who would it be, and why?

Dede LaRue: Three people come to mind — Walt Disney, Salvador Dalí and Alphonse Mucha, one of the founders of the Art Nouveau movement. Not being a big collaborator myself, I’d just love to watch what they come up with! I just learned there is an exhibit currently in San Francisco comparing the works of Dalí and Disney. OMG! That sounds fabulous.

Who in the world is interesting to you right now, and why?

I was going to say politicians, because I’m trying to find someone credible to vote for, but that’s too scary right now. So: millennials. I work with some. They’re so vibrant and energetic — and they’re going to be taking over this big, beautiful, kind of messed-up world someday. Good luck to them.

What’s one art trend you want to see die this year?

Too many outdoor “art festivals.” It’s overkill. They’ve become just another entertainment venue. And developers! Please!! Pull back on all these cheap-looking, ugly apartments and condos everywhere. You’re ruining Denver and sucking away its very soul.

I choose to maintain a part-time day job, without which I would probably be a hermit. I work at a vet hospital as a doggie stylist, and get to work hands-on with just about every size and type of dog, sculpting and shaping them, and I get paid well for it. It’s just about perfect.

A mystery patron offers you unlimited funds for life. What will you do with it?

I already rescue dogs. I would rescue a whole lot more! I would buy myself a much bigger studio. Do more traveling. I would address in some way the issue of climate change, as it concerns me. And free cupcakes for everybody!

What’s the one thing Denver (or Colorado) could do to help the arts?

I walk around and see people walking with their faces in their cell phones, a habit I believe reduces their attention span to that of a parakeet. Look around you! Art is everywhere! Notice it. Talk about it. Go see it. Like it. Don’t like it. Just don’t ignore it, thn bitch about how we don’t have any. The daily newspaper recently dropped the word “art” from the heading of its entertainment section, to “lifestyles.” (Whoa!) Use the word. Art. In a conversation today.

Who is your favorite Colorado Creative?

What’s on your agenda in the coming year?

After recovering from a major illness a couple of years ago, I feel great and happy to still be here. I have sculpture commissions to last a year, and would like to get back to painting prairie landscapes in oils that I started doing six years ago and for some reason stopped making. I am behind on my traveling and amateur geologic collecting. Spend time with my family, make a new friend and do a zipline tour someplace.

Who do you think will get noticed in the local arts community in the coming year?

I’m going to be watching with great interest the West Colfax Arts District, which is starting to happen. This is my ‘hood, and there is great potential for murals, studios, galleries, events. Lonnie Hanzon, a local guru of the visible, is working with the project. So far, the rapacious developers aren’t going there, and having this charmingly still-rather-run-down neighborhood be a local art area would rock. The neighborhood is right for it.

What the Critics say:

“Created animals that are a blend of reality and imagination, beauty and regret.” (Phyllis Wallabye, Loveland Reporter-Herald)

“I know I’ not the first and I’m certainly not the last to fall under a spell of a LaRue creation.” (Susan Froyn, Westword art critic)

DD LaRue is a self-taught mixed-media artist whose work has been featured in galleries, publications and TV.

Using a combination of sturdy, lightweight media, DD creates striking free-standing interior and wall sculptures which explore the complex relationships between animals, man and their environment.

Sometimes whimsical and sometimes challenging, DD’s eye-catching animals combine a fearless point of view with a respect for the dignity inherent in all animal species.

Dede LaRue is an artist whose early works were free and famous — or notorious, depending on how you felt about flamingos spray-painted on Denver Dumpsters.

The flamingos, and the odd windswept horse or dog, began appearing on Dumpsters in the mid-1980s.

Sanitation crews generally approved; the art brightened their job. Public sentiment was divided between ardent fans, who saw it as guerrilla art, and disapproving scolds, who considered it the equivalent of gang graffiti.

LaRue was fine with that. She liked being a controversial — and anonymous — artist. Several times, she listened in on people arguing about her work. 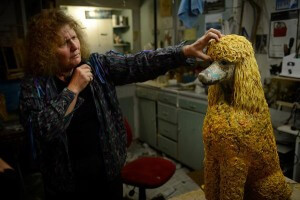 In the 1990s, she stopped painting on Dumpsters and started creating sculptures of mixed-media dogs, cats and other creatures. The sculptures practically flew out of gallery shows.

She began getting requests for commissioned work from private and corporate clients, including Kaiser Permanente’s Skyline pediatrics department, the Louisiana State University school of veterinary medicine and the Children’s Hospital of South Carolina, which has one of her signature Volkswagen car door pieces, with a porcupine and a raccoon leaning out the window.

LaRue works a couple of days a week as a dog groomer. But she spends most of her time in her basement studio, constructing creatures from chicken wire, papier-mâché, butcher cord and other odds and ends. Her works sell for between $300 and $8,000.

She is gregarious and intent, and talks at a pace that makes NASCAR racers look like they’re idling.

The 1940s-era west Denver cottage shared by LaRue and her partner of 29 years, Rebecca Leonard, vibrates with color.

LaRue spray-painted a Rousseau-inspired rain-forest mural in their living room, with a tiger peering from the foliage at an enormous mirror mosaic bird sculpture launching itself from the wall. An ersatz bison trophy, Green Buffalo, hangs on the opposite wall, shaggy with a pelt of artificial leaves.

A few feet from Green Buffalo is Vegebeagle, one of several LaRue sculptures inspired by the 16th-century sculptor Giuseppe Arcimboldo. LaRue’s latest project, chandeliers, are here and there, colored crystals sparkling in the light. On one wall, there’s an oil painting, ” Dogs Playing In Snow,” a witty scene that winks at Grandma Moses.

Nearly every room includes some tribute to a Chinese Crested, the dog breed dear to LaRue’s heart. She co-founded Rocky Mountain Chinese Crested Rescue in 2001. She and Leonard own three of the little dogs — Jellybean, Little Whisper and Joey — and often care for a foster dog awaiting adoption. The dogs look like refugees from a canine punk band, nearly naked save for tufts of hair exploding from their ears and heads, and fur tufts on their feet and tails.